Twyford School is a Singing School! 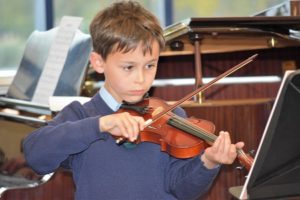 Every Twyford pupil looks forward to singing sessions with Mr Hall. We sing traditional hymns, modern hymns, beautiful songs, funny songs and sometimes sad songs. We also work on general musicianship and vocal technique. Recent favourite songs are “Firefly!”, “The Kings and Queens of England” and anything from the “Small Potatoes” TV show!

In March this year, we will be putting on a show The Dreams of Daisy Dancer. We have a proud tradition of entertaining music theatre involving all of the children in Years 6 and 7. In previous years we have presented Oliver!, Fiddler on the Roof and Joseph and his Amazing Technicolor Dreamcoat. We are also lucky to have a very creative and talented in-house writing team of Mr Christie (Head of English) and Mr Hall (Director of Music) who have written and produced a number of their original shows for the School. This year, in recognition of Mr Christie’s final year at Twyford after 28 years, the show will feature a compilation of some of the children’s favourite scenes and favourite songs from his time here. 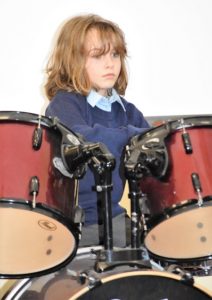 Last term we were delighted to be able to involve the parents in the year group music concerts, (sadly not with a live audience but via video link).  It was a great opportunity for the children to play in front of their friends and also for the parents to share in and enjoy the colourful musical notes bursting from the Music Hall! 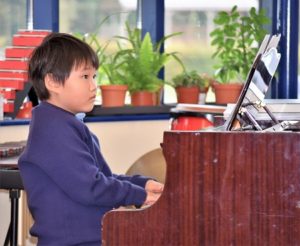 Our ongoing project to commission new music for Christmas is inspiring and exciting. We have given the premiere performance of each of the following pieces which are now available from major publishing houses.

The composers have all spoken to the children – either in person or on Zoom – to answer questions about their lives and their music.

You can find our recording of The Twyford Carols on Spotify and other streaming services. Next on the music agenda to look forward to is the recording all our commissioned music along with some of Mr Hall’s original Christmas songs.

…and now for the musical instruments

Most Twyford pupils take advantage of the wonderful opportunity to learn a musical instrument at School with over 250 individual lessons being taught each week. Piano is by far the most popular choice, followed by singing, violin and drums.

The Pre-Prep Recorder Group, Ukulele Group, Choir and Bell Choir all performed wonderfully at Christmas time. Our Junior Prep String Group Bowing 24/7 performed at a Pre-Prep assembly recently finishing with a standing ovation from the children! 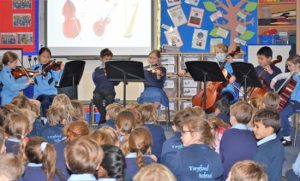 Our Senior pupils are currently busy preparing for the competitive House Music competition, their various music exams and auditions alongside preparations for the musical. Busy times in the Music Department!